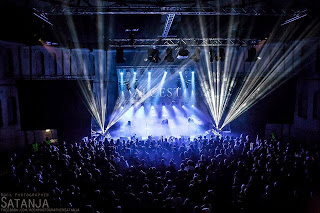 Writing a gig review can be tricky, especially if, like me, you tend to consume lots of "liquid refreshment" during these events. While alcohol undoubtedly has the effect of enhancing the experience of live music, it also has the effect of both blurring sound judgement and clouding the memory. Also, putting on the "music journalist" hat does in some ways mean that you will be studying and analyzing the music for things to say, rather than simply enjoying it on a visceral and instinctive level. Nonetheless, and despite the fact that I consumed the weight of a small child in beverages and some of the later parts of the festival have blurred into one long fog of blast beats and overpriced lager, I shall be attempting some manner of review of Incineration festival.

I should preface this by saying that I wound my way around the various venues according to whim and how drunk I was at the time. The bands I saw at the festival were based on nothing except my own personal preference, and in some cases the recommendation of friends. I am in no way shape or form a music journalist, and make absolutely no pretenses towards being objective about anything!

Having arrived at the festival and been forced to stand in an enormous (and manditory) que for wristbands which stretched round the block, I was gasping for a beer. I swiftly infiltrated the Electric Ballroom for a drink, which was even more extortionately priced than I remember. As a result, I resolved to do as much drinking as possible outside the venue. Cue Aura Noir, to take the stage, who floored the audience with their relentless mix of thrash and black metal. In spite of their puzzlingly early slot in the timetable and relatively short set, they wasted no time in laying down some agressive, relentless, and yet surprisingly catchy riffs one after another. These were complemented by excellent vocals from Apollyon and Agressor, the latter particularly standing out, with a voice so raspy it sounds like a thousand fag choked ashtrays amplified through an angry wasps nest.

After Aura Noir blasted through their set, there was just about time to sneak off for a crafty beer before Finns Oranssi Pazuzu entered the fray with their own particular brand of Black Metal. Taking the trance like and ambient elements of Black Metal and combining them with progressive and psychedelic music, they captivated the audience with an atmospheric set, which sounded like the bastard offspring of Hawkwind and Dartkthrone. Their use of synthesizers was as accomplished as it is unusual in metal, and Oranssi Pazuzu were definitely among the standout bands of the festival.

Que a quick hop over to the Underworld to see Prostitute Disfugurement, who, If i'm totally honest, I went to see mostly based on their hilarious name. They nonetheless delivered an accomplished, if fairly standard death metal set, gradually gaining in strength and brutality as the set went on. Though I've never been a huge fan of the "cookie monster" style of vocal, they were good enough to stick around for an entire set- sticking around for one more song quickly turned into another, then another, until suddenly the whole thing was finished and I wondered where the time went.

After another refreshment break and meeting up with some friends down by the lock it was back to the Underworld to check out Centurion, who in spite of the criminally small number of people who turned out to see them, delivered and electric and energetic performance, with some very memorable and accomplished solos and infectious bouncy riffs which had me banging my head so hard that I almost fell on my arse several times.

Cue a gap in the bands I was interested in seeing, which was duly used to grab some unhealthy but rejuvenating fast food from the market. On the way we passed a scene of devastation... a huge section of the Camden Market flattened and demolished, including my favorite place to buy shitty Chinese food! I suppose all this is in aid of so-called "regeneration." Whatever they build there instead, it had better be fucking awesome. Like a brothel, pub, and video arcade rolled into one.

After choking down some delicious MSG laden food and sinking some more tins of the good stuff, we made our way to see Impaled Nazarine. If I had to give their music a label it would be "war metal." They definitely play Black Metal, but they play it fast, and with an aggression that is more befiting of a grindcore band. With a harsh and abrasive sound, it is the sort of music one might want to play to an army of barbarians in order to whip them up into a frenzy of bloodlust before unleashing them on an unsuspecting village to rape and pillage.

Necrophobic were up next, and being a legendary oldschool death metal band I was rather hoping they would play a lot of material off their first album. This was made even more promising since they had reunited with original vocalist Anders Strokirk. Though most of the set comprised of newer material they nonetheless delivered a stellar set of evil sounding Death Metal. Anders himself delivered threatening and growling vocals, grimacing and gurning his way around the stage like a man whose teeth were attempting to escape his skull. They finished with two legendary songs from their debut album which brought the set to a stunning close.

In spite of the weight of beer now pressing down on my brain, I managed to work my way back across the street to catch shoegazing post-metallers Alcest. After hours of Death and Black Metal, it made a refreshing change to hear something a bit more mellow. Ethereal and subtle and weaving a dream like atmosphere, Alcest are a little unusual in the often super macho, testosterone fueled world of heavy metal. Their set was pretty captivating, their music seems to evoke a kind of vague nostalgic feeling that's hard to pin down into words. Nonetheless it was a fantastic and oddly fitting end to a day of carnage and heavy drinking. Not that the drinking ended there of course...

Alcest
https://www.youtube.com/watch?v=ksRBfsz53Eg
Posted by Adam Rich at 07:21 No comments: