Music is a strange beast. And in no time was it stranger, and in more of a state of change and transition, than in the late 60's and early 70s'. The 60's counterculture gave rise to ever weirder and more wonderful experimental types of music. Jazz continued to evolve and confound expectations. Early experiments in electronic music went from experiments in sound to something that was actually listenable. Progressive rock began to rear it's ugly head. And towards the mid 70's, the dread specter of Punk hung over the bloated and commercialized rock elite.

Out of this primordial soup, to which just about every modern type of music can trace it's beginnings, came the first hints of something strange, something powerful and primal, that would change the lives of hundreds of music fans. It had its genesis with the raw power of Hendrix, and after heading the opening chords of Purple Haze, the world would never be the same. Something was there, something primal, something brutal. The legend goes that someone who heard Hendrix play described it as "like heavy metal falling from the sky". That story has long since passed into music myth and there is no way to know if it is true. But what is undeniable that Hendrix was one of the more well known progenitors of a style of rock that would later evolve into Heavy Metal.

Metal itself has evolved and mutated countless times, and now has more sub genres than you can shake a whammy bar at. And it has largely moved away from the Blues of Hendrix into a more Classical or Punk influenced style. But still, the roots run deep, and I'm going to explore some of those roots here with some of the albums which show the first beginnings of that infamous, loved and reviled style of music known as Heavy Metal.

Of course, anyone knows that bands such as Deep Purple, Black Sabbath, Led Zeppelin and the like pioneered the beginnings of the genre, but this article is dedicated to the less well known albums that pioneered the genre. Anyone can pick up a copy of Machine Head and listen to it, but there are other proto-metal albums that aren't as well know, but just as much worth your time. These are in no particular order and chosen according to my own personal preference. 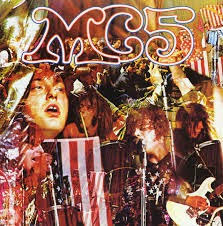 Everything about this album just exudes power, from the rallying cry of "Kick out the jams motherfucker!!" to the relentless buzz saw guitar. With song titles like "Ramblin Rose" and "I want you right now", you might mistake this album for another collection of hippy love songs. But this is as raw and as unpsychadelic as the 60s gets, with bite, aggression, and a healthy disregard for authority, law, and anything else that might get in the way of having a good fucking time.

MC5 were a band out of their time, and their gigs are legendary for their chaos, drugs, sex, and lawlessness. And knowing full well that MC5 where at their chaotic best when playing for an live audience, the decision was made that their first album should be a live album. They weren't wrong. Punk easily owes as much to this album as Metal, with Rob Tyner's highly inflammatory rhetoric (remember, it was the 60's) and declarations that "this is the high society man!" A high energy classic that still sounds arresting and powerful to this day. 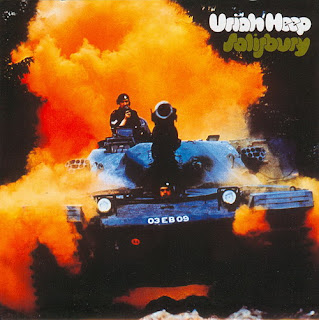 You only have to listen to the opening riff of "Bird of Prey" to know you are in the prescience of some raw heavy rock power here. A looming, ominous opener that grabs you by the scruff and forces you to pay attention. The next few tracks wind down the tempo a little, but the doomy "Time to Love" and haunting "High Priestess" keep things interesting until the barnstorming sixteen minute closer "Salisbury", which features a full choir and 24 peice orchestra and builds up into a full on sonic orgasm. It may have its head in the prog rock zone, but its heart is pure metal. 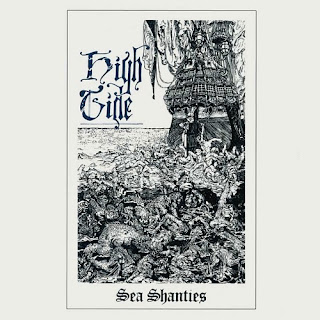 It's hard to believe this album came out of the tail end of the sixties considering the deafening fuzz of the distortion and the peircing squeal of the electric violin that permeates this record. Far from a gimmick record, this is proto metal but with a heavy dose of violin, which makes me wonder why more folk-metal band's don't incorporate this kind of thing. As with many proto-metal it's sound is squarely rooted in blues, but where Sabbath lumbered and sludged their way through an album, High Tide roll and crash like a great tidal wave, lumbering and broiling through 6 folk tinged heavy blues songs. Unfortunately High Tide received little attention at the time, which is why it's all the more rewarding to find this buried treasure. 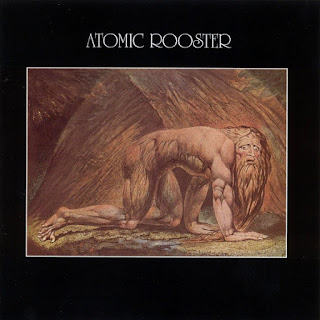 Heavy Prog Rockers Atomic Rooster weren't messing around with this offering. The foreboding title track does it's best to create an atmosphere of dread and imminent disaster, and the rest of the album isn't short on great riffs and atmosphere. Although the heat comes off on some of the more quizzical and melancholy prog tracks and the hammond organ is doing quite whatever the fuck it wants (especially on the ending track Gershatzer, where every instrument gets it's own hugely self indulgent solo) there is no shortage of great solos and fucking great riffs to bang your head to here. Atomic Rooster were one of the early metal pioneers, and it shows. 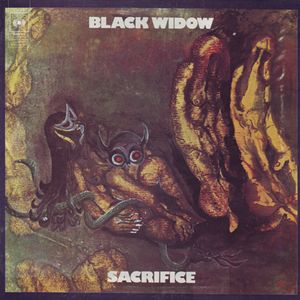 Though the name is pretty lame, it's not really "heavy" at all, and the cover looks like two humping goblins being harassed by two giant penises, this one gets a free pass because the lyrics are just pure fucking satanism. The stonking opening track, "In Ancient Days" sounds like a sermon by Alistair Crowley himself, retelling how he summoned demons to smite his foes. Though it's musically more like "The Doors" than anything related to metal, the subject matter is dark. And unlike Sabbath, who squarely portrayed Satan as someone to be feared, Black Widow are totally on board with our dark lord and master and all the gnarly shit he do. They even go so far as to include a song inviting the listener to "Come To the Sabbat" and incorporated mock sacrifices into their stage shows. Notable as the first true satanic record committed to vinyl. 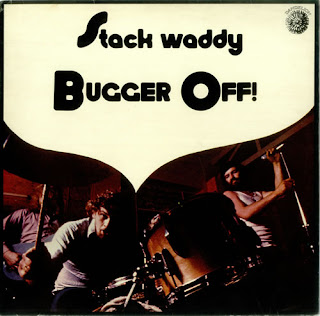 Stackwaddy is a name that, as John Peel's wife pointed out in his awesome autobiography, even now will have certain people hyperventilating and reaching for the anti-panic pills. Stackwaddy are a dirty blues band that are notorious for their sweary live performances, screamy vocals and down low dirty style of playing. Though they play the blues their attitude is much more like a metal or punk group. And their antics, including pissing on the audience before an opening number, and shoving a promoter out of their speeding van on the M6, are enough to warrant their position here. As for the album, its deep and dirty southern blues, played with oodles of distortion. Stoner metal fans in particular will appreciate the hypnotic riffs and groovy bass lines. 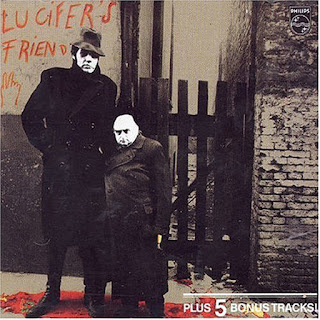 Okay, first off, what the hell is up with that cover? Why is a bald midget and a giant standing next to some graffiti and blood which is clearly drawn on to the cover? . Perhaps it's a primitive effort to shock, or one up contemporaries such as Black Sabbath. Their name is also probably meant to grab attention, since their lyrics have pretty much nothing to do with Satan. Still, this is riff-tastic early heavy rock at it's finest and will have you nodding your head without even realizing it.

German rockers that clearly listened to way too much Deep Purple, their  eponymous album opens with the stonking rocker "ride the sky", ushered in by screaming trumpets and a chugging galloping riff. The remainder of the album is very respectable heavy rock too, with "Toxic Shadows" and "In the Time of Job When Mammon Was a Yippie" (try saying that after a few pints) being particular highlights. Still not sure about that cover though. 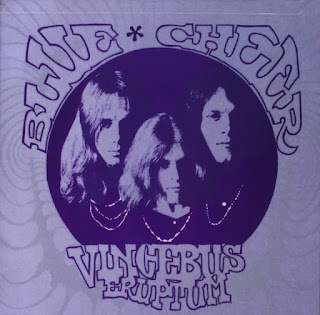 Blue Cheer are a psychedelic blues band that mostly played covers. One of which is "Summertime Blues", which at the time must have sounded like somebody smashing a amplifier shop with a bulldozer made of pure distortion. The sound of it is pretty powerful even today and it's no surprise that it's often cited as being one of the first examples of heavy metal, not to mention influencing punk, stoner rock, doom, and grunge. Named after a brand of laundry detergent which in turn had a type of LSD named after it, it sums up everything "heavy" about the 60s psychadelic movement, without any of the airy fairy, flower power, "we are all effing stardust" pretensions. 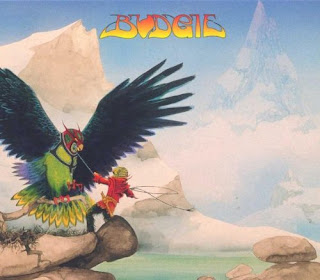 Who would have thought that the quaint Welsh valleys could produce such a din? These guys may have started the trend of having awesome artists draw your album covers (Rodger Dean, also responsible for many Yes covers) and also the trend of having singers that is hard to tell if they are male or female. Rocking with pure energy and a whole lot of heart too, Budgie are a pleasure to listen to from start to finish. One of the very heaviest of their day and a significant influence on the New Wave of British Heavy Metal. 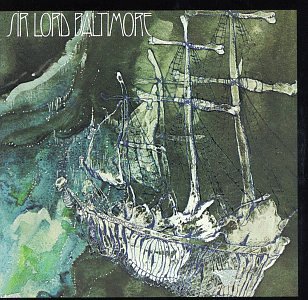 The progenitors of stoner rock? One of the first printed uses of the term "heavy metal" to describe a musical genre? Rockers from Broklyn who imploded before reaching true success due to mismanagement and drug abuse? Sir Lord Baltimore are all of these. They also have an awesomely baffling name. In their day they supported the mighty Sabbath on their paranoid tour, which makes their failure to have made an impact and be recognized as rock gods in their own rights all more the tragic. The Ghostly ship of bones and skulls that adorns the cover is a fitting tone-setter for a raw and furious masterpiece, whose influence can be felt all the way to Metallica and Dio and beyond. Stoner doom fans will love the riff tastic "Master Heartache", where "Hard Rain Fallin" will excite even the most discriminating speed freaks. This is a lost classic that belongs in the collection of every fan of classic rock, metal, and music in general. Don't believe me though. Go listen to it. Right now.